There's no knife without roses

It was a seminar series and a workshop at Tensta Konsthall addressing the role of art and artists in social change. 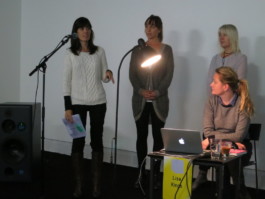 Luisa Santos, There is no knife without roses presentation, courtesy of Tensta konsthall

Luisa Santos, There is no knife without roses, courtesy of Tensta konsthall

Luisa Santos' projects reveal a special interest in critically thinking the social role of art and the art institution as well as the formats and methodologies associated with it. Her most recent experiences include her position as Executive Curator of the first edition of Anozero: Coimbra Biennial of Contemporary Art (2015) and curator of the European Exhibition of the CreArt Network that traveled along Aveiro (PT), Kaunas (LT), and Kristiansand (NO) in 2016.

In 2016, she was awarded a Gulbenkian Professorship and appointed Assistant Professor at the Faculty of Human Sciences of Universidade Católica Portuguesa, in Lisbon.

Since 2017, she is coordinating the European Cooperation project 4Cs: from Conflict to Conviviality through Creativity and Culture, a 4-year long project co-funded by the European Commission through Creative Europe. Lead by Universidade Católica Portuguesa, the project brings together institutional partners such as Tensta Konsthall, SAVVY Contemporary – Laboratory of Form-Ideas, Royal College of Art, Fundació Antoni Tápies, Vilnius Academy of Fine Arts, Museet for Samtidskunst, and ENSAD to explore the role of artistic institutions on emerging forms of conflict.

'If you won’t make a reason for people to interact, they will not do that. This is your role as a professor: to encourage students to exchange ideas.' Luisa Santos in conversation with Kasia Sobczak