Home Economics: Readings from the Kitchen

Home Economics: Readings from the Kitchen were two reading sessions which considered some of the ‘revolutionary tools’ (radical publications and manuals) from the Grand Domestic Revolution Library. As a way to introduce and collective discuss some of the issues these public events raised the reading sessions were held the week before and again the week following, and focused on the site of the domestic sphere, the sessions took place in specific homes. The first took place in Stockholm’s Museum Apartment, a 1960s home in Tensta, and the second was hosted by Tensta’s Women’s Centre, a trans-ethnic organisation that aims at breaking women’s isolation and segregation. Each session was joined by a respondent from the worlds of visual art, politics and architecture. 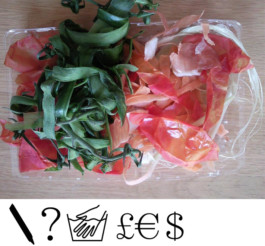 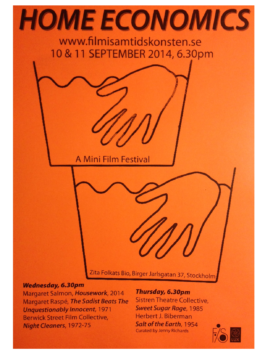 Jenny Richards' research, writing and projects focus on the politics of collaborative practices. She has developed a number of projects and texts which through this frame address issues of labour, the commons and gender, including:  Manual Labours  an ongoing collaborative research project  with Sophie Hope  exploring physical relationships to work and We Build Families:  The aesthetics of Domestic Labour  a text written with Marrissa Begonia and Louise Shelley on the work of 'Justice for Domestic Workers'. She completed an MA in Art and Politics from Goldsmiths University and has worked as Gallery Manager of artist-run cooperative, Cubitt Gallery and Programme Manager of the Collective Gallery in Edinburgh.

‘What is important is training in critical thinking and doing, and that doesn't necessarily mean you’ll go work in an art institution.’ Jenny Richards in conversation with Vasco Forconi