As her final individual project, CuratorLab participant Candace Goodrich presented an audio-visual live sound installation by the ArtSci Nexus Team ‘A Well-Tempered Brain’. The exhibition What thinking sounds like took place in two modules with introductory lectures followed by live performances, featuring classical string and digital variable ensemble, first opening at Audiorama (http://www.audiorama.se – Stockholm, SE) on May 31, 2017, and thereafter at Faktor (http://faktor.hamburg – Hamburg, DE) on October 6-15, 2017. The project was generously sponsored by the Goethe Institute Sweden, the Hamburger Kulturstiftung, the University of Edinburgh and Keele, ASCUS, ArtiScience, Audiorama, Faktor, and the Global Young Academy.

The team consisted of artists Anton Koch and Mark Matthes (also known as Chamberlab), with guest musicians Ruth May and Andrew Krell, as well as sound musician and theoretical physicist Dr. Sergey Kostyrko, and molecular biologist Dr. Alexander Kagansky and bioengineer Dr. Paul Roach.  The immersive experience of What thinking sounds like, resulted from ongoing experiments with making sounds from the neural network data in the study of Parkinson’s and Alzheimer’s diseases.  The conceptual artistic approach to scientific research used classical music composition methodology in order to gain new perspectives in data analysis. Ordinarily, data is examined graphically, however in this case, the ArtSci Nexus team drew upon the complexity of sound diagnostics instead, in the hopes that it could lead to new discoveries.

In the pursuit of expanding interdisciplinary approaches, the team developed a process of sonification modifying ‘machine learning’ software to algorithmically recognise, predicate, and convert metadata streams into compositional means (i.e. chord sequences, transpositions, harmony and dissonance, tonal and rhythmic variations). The data set used was a collection of electrical pulse signals from cortical and striatal nerve cells of the human brain grown over a special microchip which consists of 64 electrodes that record the neural activity to be studied.  Further investigations dug even deeper, comparing the gene expression of deceased Alzheimer’s patients against non-AD samples, which is the leading cause of dementia symptoms.  The exhibition addressed critical questions such as: do the genes of one patient sound different than the other? If so, in which ways, and what can this tell us in terms of possible prevention, treatment, and cure?

By this method of sonification‘a group of neurons can be imagined like a group of instruments within an orchestra’, explained molecular biologist Dr. Alexander Kagansky; ‘Music has the potential to be a goldmine for science’. 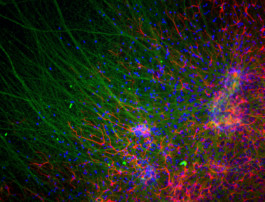 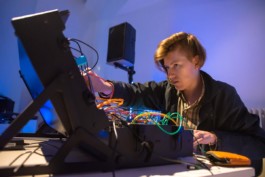 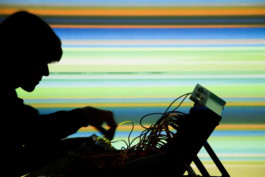 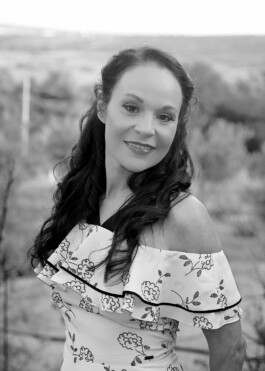 Candace Goodrich is an artist and independent curator, currently living between Vilnius, Lithuania and Stockholm, Sweden. She holds a BFA from the School of Visual Arts (NYC) and MFA from the New York Academy of Art (NYC), both degrees with a concentration in painting. She was a participant of CuratorLab at Konstfack in 2016/2017. In 2018 she completed a second master’s degree in Postcolonial Theory and Multiculturalism at Södertörns Högskola, Stockholm.  She founded and directed her first curatorial project in 2012-2014, the international artist residency One-Sided Story involving 38 artists. She was the founding Art Director of the Kunstkraftwerk Leipzig, where she curated 16 international exhibitions, involving over 100 artists, representing over 30 countries, sponsored by numerous foundations, embassies, and ministries of culture worldwide. In addition to the exhibition programme, she co-directed a complimentary education programme and, together with Pogon-Zagreb, hosted ICSC-Intercity/Switchcity, a three year curatorial/collective residency exchange programme. She is co-founder of the ArtSci Nexus, an interdisciplinary platform fostering collaborations between the arts and sciences.

‘The idea was to create new platforms for the things I am interested in rather than being a passive backseat-driver who is just bitching about the current situation.‘ Måns Wrange in conversation with Candace Goodrich