Images from a present memory

Images from a present memory  was an event that premiered Black Code/Code Noir,  the latest video by British artist Louis Henderson. The new work was introduced in  a conversation between the artist and curator Valeria Mancinelli about his research and through two previous works, Lettres du Voyant  (2013) and  All That is Solid  (2014). These videos were filmed in Accra, Ghana, in and around a waste ground where thousands of computers are being recuperated by young men, who break and burn the plastic casings in order to extract the precious metals contained within as a kind of reverse neocolonial mining. Henderson’s work seeks to produce analogies between colonialism and technologies as forms of control.

Black Code/Code Noir  brings together various temporally and geographically disparate elements into a critical reflection on two recent events: the murders of Michael Brown and Kajieme Powell in Missouri, USA, 2014.  Black Code/Code Noir  looks into the ways in which the murders were captured and disseminated on the Internet by citizens who witnessed the events and their aftermath, thus encouraging a reflection on the manipulation, circulation and control of images in this contemporary moment. Focusing on videos recorded by mobile phones and uploaded on YouTube, the forming of social media networks as both meeting points for demonstration and remembrance, and the online (mis)representation through state controlled media – Black Code/Code Noir uses the Internet as a  social site of excavation. Taking an archaeological perspective  Black Code/Code Noir  traces back a certain route through history in order to find the complex origins of what makes such tragedies occur – drawing a series of lines from the murders of Brown and Powell within the age of algorithmic  Big Data  policing to the  Black Code  laws that designed the treatment of slaves in the Americas. These codes have morphed in their digital becoming from paper decrees to algorithmic interpretations, yet the intent remains the same: to design the lives of people in minority, to keep them within the plantation capitalist system.

Yet how can human bodies have agency in this situation and how can this necropolitical control be resisted? As a movement towards an answer  Black Code/Code Noir  makes a historical détournement  towards a past future and looks to the Haitian revolution as a symbol of a future possibility; if France’s 17th century Code Noir was the original form of this algorithmic governance then the Haitian revolution was the first instance of its hacking. Yet how do we read this in the present? How do we rewrite this code as a hack?

Images from a present memory  was produced in the frame of CuratorLab program at Konstfack and presented by Mount Analogue in collaboration with Platform Stockholm.

Louis Henderson (UK, 1983) is an English artist and filmmaker, his work investigates the networked links between colonialism, technology, capitalism and history. He has shown his work at places such as: Rotterdam International Film Festival, CPH:DOX, Transmediale, the Centre Pompidou, Museo Reina Sofia, Tate Modern and Whitechapel Gallery.

Mount Analogue is a publishing space, curatorial and editorial agency and analogue studio, initiated 2011 in Stockholm by Diana Kaur and Tris Vonna-Michell. Recent projects include the exhibition Port by Yuki Higashino and Elisabeth Kihlström and the publication Collapsing Ourselves, a twelve-inch vinyl record by Mattin and Hong-Kai Wang.

Platform Stockholm is an arts organization dedicated to the development of cultural production through collective participation in net-based systems to create shared resources initiatives. Platform is a place for work, collaboration and meeting for over one hundred cultural producers, mainly artists, but with a large variety of professionals ranging from designers to writers, photographers to architects. 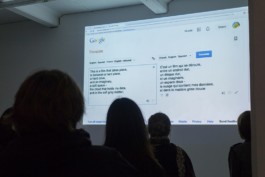 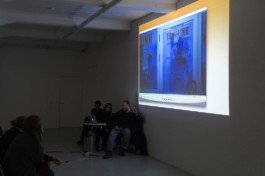 Valeria Mancinelli is a contemporary art curator and researcher currently living in Florence. She is completing her PhD in Cinema and Visual Culture at the University Roma Tre. Her research develops around the role of moving images in contemporary artistic production, with a particular focus on their relationship to history and role in Middle Eastern contexts.

She is part of Lo schermo dell’arte Film Festival’s team, an international project dedicated to explore the complex relations between contemporary art and cinema. In 2015, she co-found Sonic Somatic, a diffused Festival that condenses in a few days a wide cultural offer playing with the relation between body, space and sound.  She has curated several exhibitions in Italy and abroad, and recently she has edited the publication Lo schermo dell’arte 10 Years Between Contemporary Art and Cinema  (Giunti Editore, 2019) that collects original contributions from fifteen international curators.