Performance as Sculpture was a project in progress on performance and the objects it activated by curator Valentina Sansone. Conceived for CuratorLab,Performance as Sculpture: Ecstasy of Things was its second event: a series of two workshops run by artists Benjamin Valenza and Nicole Bachmann, and the students of: Konstfack University College of Arts, Crafts and Design / The Royal Institute of Art / Stockholm University of the Arts (DOCH, School of Dance and Circus). With a screening of video works by Ellie Ga.

The combination of things, performers and audience in the same environment defines a particular mode for the object to be present: it builds up the performative space by affecting its surroundings. By coining the term “ecstasy of the object”, as an attempt to describe how things appear as present, philosopher Gernot Böhme also introduced the concept of ‘space’ as an element originating from primary qualities of an object, such as its extension and form, its sound and smell, the modes through which it acts on the performers and seizes the audience.

If the practices that allow the circulation of the performance make also the performative space expand, what is the new condition of the object/sculpture, and how is it critically assimilated?

With “Performance Proletarians / Hit the North”, Benjamin Valenza addressed to issues such as the language and the circulation of ephemeral formats. During a one-night public event, the audience could choose to attend a 3-hour programme “live” at off-space Andquestionmark; streamed “live” online; or both, simultaneously.

Nicole Bachmann: From text to performance to print

From Text to Performance to Print was a workshop about performance and text where language/voice/text is at the core of the work. It took into consideration the different forms and formats text can inhabit e.g. printed, spoken word, or text-based performance, as well as written text that is performative through its structure or form.

From March 13 to May 13, Performance as Sculpture Screening section featured a selection of videos by artist Ellie Ga, hosted at the Konstfack Library video room. Meant as a fixed device –opposite to the dynamic structure of the workshop series– this section also presented a selected bibliography of texts proposed by invited artists, critics, curators, choreographer and dancers etc.: a platform for the public to meet, read and discuss.

Nicole Bachmann mixes text-based performances with objects and sound in order to animate her site-specific installations. Bachmann is the founder of Performance as Publishing (with Ruth Beale), an independent practice-based research project that explores the relationship between the written word and exhibition-making, audio and performance. She lives and works in Zurich and London.

Ellie Ga is researcher at the Royal Institute of Art in Stockholm. Her work originates from long-term processes that often depart from a research in situ: a scientific expedition near the North Pole or a marine archeology program at Alexandria University. Her most recent projects (Square, Octagon, Circle, 2012 and The Fortunetellers 2007-2014) include a series of videos, performances, photographs and ephemera, installations, texts and interviews that she organizes into separate subcategories, binding narratives from her routines and involving the public through storytelling. She lives and works in London.

Benjamin Valenza’s performances include sculptures, poetry, literature, and videos. In 2014, he conceived the project Performance Proletarians with artist Lili Reynaud-Dewar: a live broadcast of a 36-hour program of performances. He is the co-founder of Galerie 1m3, an artist-run space based in Lausanne. Valenza lives and works in Rome. 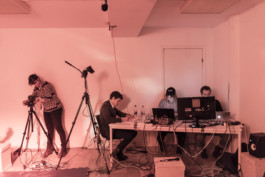 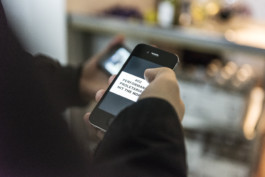 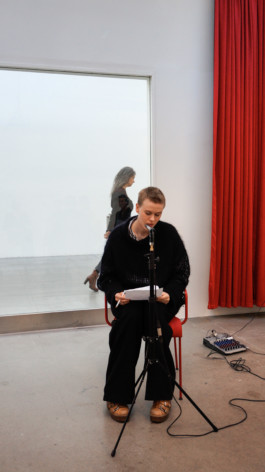 Valentina Sansone is an independent writer and curator of contemporary art, currently based in Palermo, Italy, and Stockholm, Sweden. Sansone's practice focuses on performance in the public space. Since June 2018, she is the founder of Magazzino Brancaccio, a project on education, experimental music and performance.