Nevertheless, Faith is in the Air

One of the projects Moore realised while a participant on the CuratorLab programme was ‘Nevertheless, Faith is in the Air’. This project was a collaboration between Diana Kaur, Konst & Technik, and Moderna Museet. The project culminated in a pamphlet, which assessed seven works of art from the last century from Moderna Museet’s collection in which the presence of a utopian impulse remains tangible. In investigating these seven artworks, Kaur and Moore underscore that while art has never been (and cannot be) a substitute for proscriptive religion, it can be a fountain of meaning and a mode of communication capable of elevating us above the void of a faithless existence. To mark the launch of ‘Nevertheless, Faith is in the Air’ at Moderna Museet, a performance took place titled The Luminiferous Aether. It comprised of documentation made by Robin Watkins of low frequency audio signals, which originate from the streams of charged particles that reach the Earth’s atmosphere through the Solar Wind, giving rise to the Aurora Borealis and other magnetic storms. 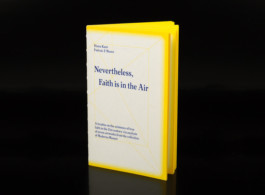 Pádraic E. Moore is a writer, curator, and art historian. He holds a BA in History of Art and English Literature from University College Dublin (2004), an MA in Visual Art Practices from IADT, Dublin (2007), and he completed CuratorLab in 2010. Moore is also a former participant of the Jan van Eyck Academy, Maastricht (2014-15).  Moore’s practice is shaped by the belief that visual art enables alternative modes of interaction in a world increasingly led by technological rationality. Moore’s curatorial methodology is meticulous but subjective and is informed by an acute awareness of the artist’s individual position.

Recent research focuses upon the influence that esoteric philosophies have had on the literary and visual arts. Several projects have explored how organisations, such as the Theosophical Society, offered a vital catalyst for change in late 19th- and early 20th-century art. Moore’s projects often examine how contemporary culture has embraced aesthetics and ideals informed by such esoteric traditions. Latest curatorial projects include, I am so multiple in nights, The Pool, Brussels (2019); The Last Great Album of the Decade, The LAB, Dublin (2019); Letters of Last Resort, Damien and The Love Guru, Brussels (2018), and The Width of a Circle, W139, Amsterdam (2018).