What happens when theatre meets performance? Bar Drama attempted to investigate the relationships between theatre and performance, in particular how the use of language typical of the theatre relate to the forms of visual arts, especially performance, and how artists deal with these questions.

Bar Drama transformed the bar into a theatre foyer where the audience wait for something to happen and in which the lines between fiction and reality, theatre and performance are blurred. In this frame and its beautiful view on Djurgården, three artists –  Louise Dahl-Lindvall, GIDEONSSON/LONDRÉ, Charlotta Smith – presented site-specific works using tools and techniques taken from theatre, mixing them with their own practices. The artists have different approaches but they are linked together through an interest in exploring the possibilities of experimental theatre.

Every piece was focused on different aspects of the theatrical in performance, such as the body, the script, and the actor.
Louise Dahl-Lindvall narrated a story and included the public in a “one-by-one” performance; GIDEONSSON/LONDRÉ pursued a physical action through a wind machine and a manuscript and Charlotta Smith played with two actresses and the audience through a poem. 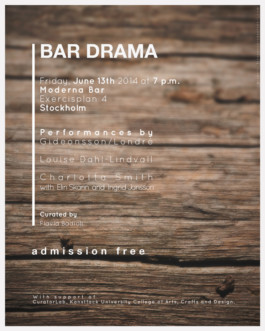 Flavia Badioli was born in Pesaro (Italy) in 1986, lives and works in Rome. She holds a BA in History and Preservation Fine Arts at University of Florence and an MA in Curating Contemporary Art at University “La Sapienza” in Rome with a thesis about Michelangelo Pistoletto and The Zoo. During her studies, she worked at the Civic Museum in Pesaro in 2008-2009 and in 2011 she did an internship in the Education Department of MAXXI – National Museum of XXI Century Arts, Rome.
Then, she continued working at MAXXI as a Museum cultural mediator during the exhibition Michelangelo Pistoletto. From One to Many, 1956 – 1974. In September 2013 she moved in Stockholm to attend CuratorLab, Curatorial Program for Professionals in Arts, Crafts and Design at Konstfack University.
From 2012 to 2016 she worked at z2o Galleria by Sara Zanin in Rome as project manager and gallery director, organizing exhibitions and art fairs. In 2016 she worked at Federica Schiavo Gallery, a contemporary art gallery based in Rome and Milan.
Flavia is particularly interested in performance and use of the body, investigating it by using other languages (especially theatre), following an interdisciplinary approach to Contemporary Art.