The striking Italian Cultural Institute in Stockholm and its theatre was designed in 1954 by Gio Ponti and Pier Luigi Nervi, two of the greatest proponents of Italian rational architecture and design in the Twentieth Century. On May 18th, for one day only, it became the set for a series of temporary interventions by artists Marcus Harrling, Marc Matter, and Tris Vonna-Michell.

The reference point of the project Involucri pittorici rigidi - a descriptive evening of a publication curated by Federico Del Vecchio, was the French avant-garde movement Lettrism and the act of ‘walking’ as a methodology of connection between language, voice, poetry and architecture. The artists installed and perform a series of displays related to concrete, visual and sound poetry.

Marcus Harrling’s fascination for the value of the TV media in the pre-internet era informs his practice. For this exhibition, he presented a new video and sound collage remixing previous projects.

Interested in the methods of text-sound-poetry and the manipulation of language and voice as artistic material, Marc Matter presented a listening session of historic and contemporary text-sound poetry with an introduction.

Through storytelling, mise-en-scène, installation and a listening session, the artists reconstructed stories twisting narrative structures and intersecting fragments of fiction and reality.A selection of materials on visual - sound - concrete poetry was displayed in a series of vitrines designed by Gio Ponti.

The title of the project is partly inspired by the end notes of a book by Sarenco (Italian poet and artist, founder of Amodulo, a publishing house of concrete art and visual poetry and the magazine Lotta Poetica, in the late sixties). The English translation of ínvolucri pittorici, ‘rigid pictorial wrapping’ refers to the materialistic language of poetry, but it also suggests an immaterial approach towards the idea of a publication.

Marcus Harrling (born 1978, Stockholm), is a filmmaker, musician and sound artist working with field recordings, fiction and documentary. A deep interest in technical devices leads to shifting forms of presentation at different occasions. Circular narratives, memory and banality are subjects that reoccur. Film i Samtidskonsten presented two films by Marcus Harrling in Dec 2016, together with Per Nyström he forms the duo Diagnos who recently released an album at Diagnos Records distributed by Control Freak Kitten.

Marc Matter (born 1974, Basel), sound-artist and researcher, former member of artists-group Institut fuer Feinmotorik, studied at Art Academy for Media Arts in Cologne with Valie Export and Siegfried Zielinksi. He is assistant-professor for Music & Text at the Institute for Music and Media (Düsseldorf) and has been one of the curators of Düsseldorf’s Salon des Amateurs venue, and of the exhibition about Henri Chopin and OU review (Basel Ch 2013), and the International Festival for Text-Sound-Poetry at ISSUE project room (Brooklyn 2015).  He is interested in manipulations of voice and speech sounds, and searching for semantic collisions, which he presents as both live and recorded-performances, as well as radio-broadcasts. Collaborations with several artists, i.e. poet Dagmara Kraus, performance-artist Veridiana Zurita, visual artists Haseeb Ahmed and Tris Vonna-Michell, sound-artist Tom White. Lives in the Black Forrest (Germany).

Tris Vonna-Michell (born 1982, Southend-on-Sea), lives and works in Stockholm. He stages installations and performs narrative structures, using spoken word, sound compositions, film and photography. Through live performances and installations, Vonna-Michell creates circuitous, multilayered narratives, characterized by fragments of information, detours, and repetitions. In 2010 together with Diana Kaur he founded Mount Analogue a publishing space, curatorial and editorial agency and analogue studio. In 2014, he was shortlisted for the Turner Prize.

The event is generously supported by the Italian Cultural Institute, Stockholm, with additional special thanks to the following organisations: Fondazione Morra, Untitled Association, Konstfack University. 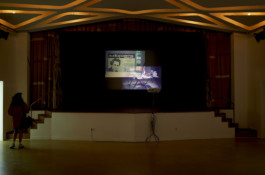 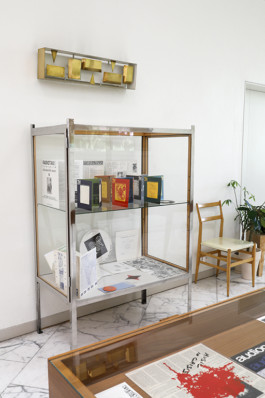 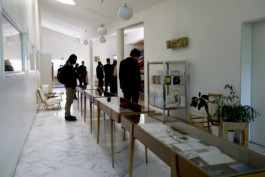 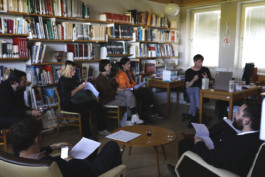 Federico del Vecchio (Naples) He is engaged in an independent artistic practice as well as co-curator of flip project, a collaborative project which extends his research interests and allows a platform for critical experimentation. After finishing his studies at the Academy of Fine Art in Naples, he attended the Städelschule in Frankfurt am Main, followed by completing the Master in Fine Art at The Glasgow School of Art. He was then at the HIAP – Helsinki International Artist in residence Program supported by 2012 Movin’ Up prize for the mobility of young Italian artists abroad. He is the recipient of the Marie Curie Research Fellowship 2015 at the University of Ljubljana, Slovenia. In 2017, He has taken part at the Banff residency program, Alberta, CA, thanks to the support from financial aid of the Banff Centre and Nctm e l’arte: Artist-in-residence VIII edition, Milan, Italy. Federico completed Curatorlab at the Konstfack University in Stockholma curatorial course for professionals in Arts, Crafts, Design & Architecture, directed by Joanna Warsza in collaboration with Tensta Konsthall.

Most recent workshops, solo and group exhibitions include: