The Struggle within the Struggle: the Stockholm Chapter

In her performance The Struggle within the Struggle: the Stockholm Chapter, Sally Schonfeldt called for an action, appropriating the technical strategy of demonstrators manifesting in public spaces in which a megaphone is used to address those gathered marching or assembled on a particular site. She subverted the intended usage of this political tool by bringing it both into the exhibition site itself as well as into the public space. The artist questioned the potentiality of language as political speech, not simply as a rhetorical device and declaration, but in terms of its performative and somatic quality encompassing the voice and (deconstrucive) uncompleted gestures. This idea alone could be taken as a poignant symbolic for the actual content of her political speech – the under-recognition and relative obscurity within historiographical practices of the contribution of women revolutionaries to left-wing struggles.

We need a new space for love(s), of (a) decolonized Eros(es) that needs continually to be re-invented, re-constituted and committed to. Spacing is a concept that gives consistence to these ephemeral and temporally based practices, borrowed from Judith Butler and her conceptualization of love from the perspective of the affective politics of the performative, or the political affect of love – plural performativity. 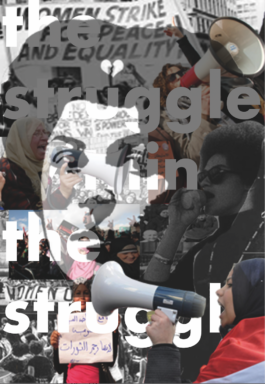