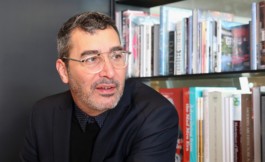 Christian Alandete is an art critic and curator currently serving as Artistic Director of the Giacometti Institute in Paris, where he is also in charge of relations with contemporary artists. He has coordinated more than twenty publications on Alberto Giacometti that were co-published by the Giacometti Fondation, and has acted as associated curator or curator for the Giacometti retrospectives at Pera Museum in Istanbul, at Fonds Leclerc in Landerneau, at Yuz Museum in Shanghai, at LaM in Villeneuve d'Ascq and of thematic exhibitions in Nice (Giacometti - The Late Work), Doha (Picasso - Giacometti) and Seoul (Giacometti - After Models). He co-curated the major retrospective Henry Moore at Fonds Hélène &Edouard Leclerc in Landerneau. He also curated a dozen exhibitions of contemporary art in France and abroad includind Swedish School of Paris at Swedish Institute in Paris, Alberto Giacometti - Annette Messager, Nos Chambres and Teresa Hubbard / Alexander Birchler, Flora at Giacometti institute, Carole Douillard, The opening in various venues in Saint Petersbourg, Russia. His research mainly focuses on the relationship between contemporary art and art history — and in particular from the modern period. He is curating the performance Program Partitions (Performances) at Fondation d’entreprise Ricard in Paris since 2008. He hold a Mastrer Degree in Cultural Studies from Lyon 2 University and was participant of Curatorlab at Konstfack, Stockholm in 2008.