The artistic intervention Panda Diplomacy was the outcome of a dialogue initiated by curator Chiara Nuzzi with invited artists duo Curandi Katz in the frame of 2015 session of CuratorLab international programme at Konstfack University. The dialogue originated from the reflection about what concepts like migration, otherness, togetherness, soft power, cultural integration and resistance are, how they relate in art and life and how the postcolonial condition might characterize our contemporary society. Curandi Katz’s artistic process and their work face such issues involving and filtering them through the concept of the family as an active strategy in the artistic practice, contextualizing such an idea in a country very dedicated to the care of children’s life and education as Sweden is.

In the living room of a private house in Stockholm, an impromptu dubbing system was set up for a muted screening of the Japanese animation Panda! Kopanda! The main character, a little girl named Mimiko, represented a loose appropriation of the Swedish childhood icon Pippi Longstockings. The animated film is the consequence of a historical incident in which an adaptation of Pippi was denied. As a result, the cartoon acted a pre-textual element that offered a reflection on concepts of re-appropriation and adaptation, cultural transmigration and soft power and the ways in which they are inserted into and among cultures. The private house, open to the public on specific hours for the duration of four days, hosted karaoke-like sessions of dubbing: any two or three participants could dub in real-time the show into Swedish and spectators in the living room could witness the live performance adaptation of Panda! Kopanda! into Panda! Heja, Panda!.

During the first evening of the screening, the performance featureed the appearance of Swedish performers and actors Emelie Jonsson, Maria Grudemo El Hayek and David Fukamachi Regnfors. Audience members werefree to enjoy the party, take part, take over a character and become performers themselves.

Panda Diplomacy represented empowerment strategies for different communities, focusing on how art practice and education play a pivotal role in the postcolonial discourse and presenting itself as an artistic active de-colonizing gesture. By realizing alternative forms of life at once oppositional and creative, the physical gesture staged by Curandi Katz proposed creative ways to reorganize the political, the familial and the artistic spaces. These concepts, and an artistic methodology that utilizes familiarity as an inclusive process for subverting circumstances in place, were further developed by the artists during an artistic residency at the Italienska Kulturinstitutet in Stockholm in 2016.

The project was accompanied by a publication featuring texts by Curandi Katz, Chiara Nuzzi and Veronica Wiman, with further visual interventions by the artists.

The project supported by: 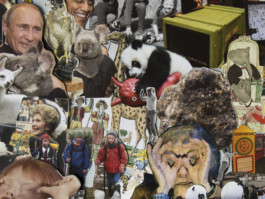