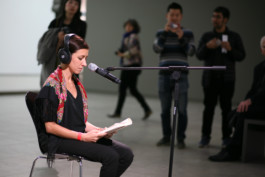 Throughout the academic year 2016/2017 we have been working together with curator Maria Lind and writer Michele Mascucci on re-staging The Trial / Il Processo (2010/2017), a performative piece by Italian artist Rossella Biscotti, based on the original courtroom recordings from the 1982–84 trial of members of Autonomia Operaia in Rome. CuratorLab organised related research, reading groups, and meetings, prepared the transcripts and finally enacted The Trial at Tensta konsthall in Stockholm first as an open rehearsal, and then as a performance at the Hamburger Banhof in Berlin.

On the 7th of April 1979, a number of left-wing activists and intellectuals, members of Potere Operaio (Workers Power) and Autonomia Operaia, including the subsequently influential philosophers Antonio Negri and Paolo Virno, were arrested across Italy on charges of terrorism. They were accused of leading of the armed organization Brigate Rosse (the Red Brigades) and creating the intellectual backing for left-wing radicalism. The original trial took place between 1982 and 1984, before the Criminal Court of Rome, in the high-security courthouse that hosted important trials of Italy’s ‘years of lead’ (Anni di piombo) – a period of social turmoil and extremism in Italy (its name comes loosely from the number of bullets being used back then). The fact that Autonomia Operaia was not related to and did not direct the Red Brigades was recognized by the Italian legal system when all charges were dropped on appeal 1987.

Rossella Biscotti edited a six-hour version from the original recordings by Radio Radicale, a radio station run by Italy’s Radical Party. The original audio was translated and interpreted live by a number of Stockholm-based cultural producers including CuratorLab participants, invited artists, activists, and other inhabitants from Tensta.

The act of translation is also an act of mediation, and embodiment of the ideas developed by Autonomia Operaia. The piece offered the performative act of transversing and translating the trial with one’s own body, experiencing and re-expressing concepts such as labour, wage negotiation, precarity, immaterial working conditions, and other core notions. These are all notions that many cultural workers of today are actively rethinking – often inspired by the so-called Operaist movement - in order to potentially gather in solidarity.

The Trial was a joint project by Tensta konsthall, CuratorLab at Konstfack University College of Arts, Crafts and Design, Konstfack Research Week 2017 and IfREX in Berlin. It was part of Tensta konsthall’s multi-year inquiry The Eros Effect: Art, Solidarity Movements and the Struggle for Social Justice and looks into the relationship between art and solidarity movements, performed in a series of commissions, exhibitions, workshops, presentations, and film screenings.

With support from the Italian Institute in Stockholm.